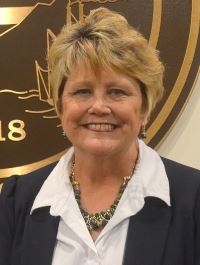 Victoria (Vicky) Goad James is a lifelong resident of Jefferson County.    Vicky lived in High Ridge until age twelve when her family moved to Cedar Hill.  Vicky worked several years for her parents,  Norman and Helen Goad who were developers in the area.  Vicky’s Dad was the first President of the Jefferson County Builder’s Assn.  Vicky has over thirty years of Executive Management and Leadership experience, serving the community in both the private and public sector.  Vicky received the appointment on the County Council District 7 seat after Jim Terry resigned.

Vicky went to work for Sunnyhill Inc. as the camp director for several years before being promoted to President/CEO and served in that role until 2019.  During Vicky’s tenure as CEO Sunnyhill expanded residential services to Jefferson County by purchasing two residential care facilities one in Festus and one in Desoto.  The overall budget grew from 7 million to 17 million. Sunnyhill had over 350 employees and 500 residents as well as 700 campers each summer.   Sunnyhill received a Jeffersonian Award and many Jefferson Memorial Foundation grants during her tenure.

Vicky then went to work for Chapel Mortuary as COO.   Vicky helped with renovation projects, facilitated grief groups, opened a non-profit called Cherish to hosts community events in the area.   Vicky and her husband Ron, owns a dog named Sister Cherish that is being trained at Gateway Canine for grief support. Vicky left Chapel Hill April of 2019.

Vicky currently works as Chief Advancement Officer for Lafayette Industries a non-profit that employs individuals with developmental disabilities. Lafayette does a full range of customized packaging and fulfillment services. Lafayette has the STEPUP program that provides individualized training program designed to showcase the abilities of individuals with IDD to gain and/or maintain competitive employment.

In addition to numerous awards given to organizations that Vicky has served, Vicky has been a Region 7 Finalist for the Paul Morris Award; has been honored with the MNEA Friend of Education; and was a winner of a Woman of Distinction Award from the Missouri Athletic Club in 2015.   Vicky previously served on the Comtrea Board of Directors, served on the Charter Commission and Merit Commission of Jefferson County.   Vicky currently sets on two non-profit boards, Waigand Wheels and CHERISH.